CAPITAL STEEL BUILDINGS – the best of the best

In July 2014 Capital Steel Group was awarded its CE accreditation for design protocol, the first company in the cold formed kit building market to do so. This was the culmination of years of investment and effort to gain market acceptance of our innovative approach to portal frame design and made us leaders in our field

Why are CSL the Market Leaders in our field?

What distinguishes CSL from all our opposition is the research, testing and development that have been conducted on our frames to give confidence to ourselves and a sceptical industry that correctly designed, cold formed steel structural frames are as competitive and fit for purpose as hot rolled.

We are at a turning point in this industry and the award of the CE Mark was the next stage in this process.

However, I feel you need to understand a little more the background that has led us to this point and sets us apart from our competitors It is our investment in research and testing 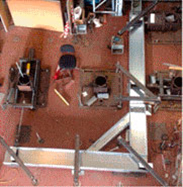 Our Research and Development Manager, Andrzej Wrzesien joined our engineering team full time at the start of 2014 after completing his PhD and a two-year Knowledge Transfer Partnership (KTP) between ourselves and Queens University, Belfast. A KTP is a three-way project between an academic, a business and a recently qualified person (known as the Associate).

The KTP works with over 140 universities, further education (FE) colleges, and research and technology organisations (RTO) across the UK, which translates into over 450 university departments. That includes all Research Excellence Framework (REF) rated departments, covering a wide range of academic disciplines – including engineering, computer sciences, physics and mathematics, management, social sciences and the arts. If you would like more information, go to: www.ktponline.org.uk

Andrzej and CSL were awarded a Certificate of Excellence for an Outstanding project which less than 5% of KTPs achieve. We are also contenders for a National prize in 2015. CSL sponsored Andy through his Phd and over the past 7 years he has tested all the key components that make up our frames culminating in a full scale test to failure of an assembly in the lab at Strathclyde University

Our structural checking engineer is Dr Asraf Uzzaman. Ash was sponsored through his PhD by CSL and in association with Strathclyde University, Glasgow and he too gained an Outstanding award. He is a specialist in Finite Element Analysis – computer modelling to the layman. 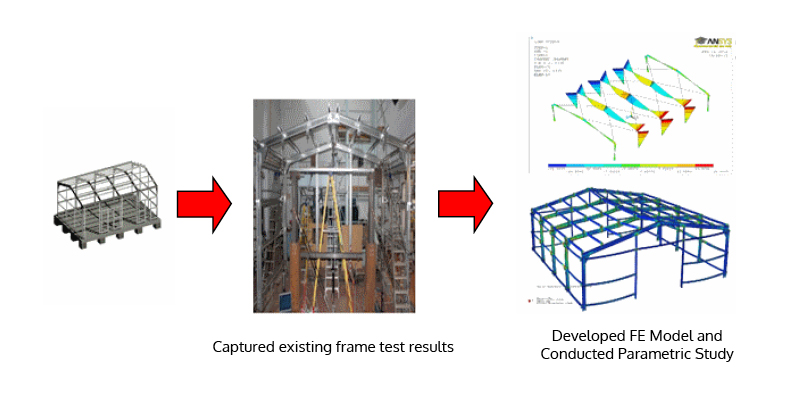 Using the HPC (High Performance Computer) at Strathclyde University he has taken the physical test data that Andy produced in the lab and used this to calibrate models of all our brackets and their behaviour under load. He has also emulated the full frame behaviour of our frames and obtained excellent comparison between his models and the physical world. We can now confidently design and model in the virtual world removing the need for expensive and time consuming physical testing.

Capital Steel, with its ubiquitous trade mark, CSB, Capital Steel Buildings, created this sector of the kit building market and has been the market leader since the Company`s establishment in 2004. Many of our competitors have links back to CSL either as ex- distributors or manufacturers of CSL components.

As I mentioned in my article both Andy and Ash received Outstanding grades for their KTP achievements but it did not end there . We learnt in September 2015 that Capital Steel, Strathclyde University and Ash had been nominated in Innovate UK`s Best of the Best Awards in two categories, Engineering Excellence and Best Partnership.

This press release describes in more detail the reason for our nomination:

Scotland based Capital Steel Buildings, the trading name of Capital Steel Ltd, has been shortlisted for the Best Partnership and Engineering Excellence prizes at this year`s prestigious Knowledge Transfer Partnerships (KTP) Awards. The firm, which is the UK`s leading supplier of cold formed steel kit buildings, has always prided itself on its contacts with academic institutions which has already led to two of its Knowledge Transfer Partnerships being graded as “Outstanding”

Knowledge Transfer Partnerships is a UK-wide programme linking commercial organisations with academic institutions to help support and shape the future of British business. Its primary objective is to help businesses grow through improved innovation, competitiveness and productivity via better use of the knowledge, technology and skills available within UK universities and other parts of the UK knowledge base. It is funded by the Government’s innovation experts, Innovate UK, along with 12 other public sector partners, and aims to strengthen the competitiveness, wealth creation and economic performance of the UK by enhancing knowledge and skills, and stimulating innovation through collaboration.

Capital Steel Building`s partnership was a double success for the company as it meant that the company was the first in the market to obtain their CE accreditation, without which the company could have been forced out of business.

The validation of the design protocols that the KTP provided demonstrated to the CE assessor that our designs are verifiable, safe and fit for purpose.

The technical challenges to the partnership were significant. The quality of the work and engineering excellence exhibited by the Associate and the support of the academic partner, Strathclyde University, made it happen.

No company has invested to the degree of Capital Steel Buildings to convince a sceptical market of the suitability of cold formed steel as a viable alternative to hot rolled steel for the manufacture of portal frames. The KTP was a large part of this

The Awards exist to celebrate the standout success and achievements of a few outstanding individuals and organisations. They will be presented during a high profile ceremony taking place on 10th November as part of Innovate 2015, the UK’s two-day flagship conference, exhibition and networking event held in partnership with UK Trade and Investment (UKTI).

The event will be attended by over 400 leading figures from the world of academia and innovation, as well as UK investors and international delegations visiting London for Innovate 2015.

Commenting on the short-listing, Alan Hendley, UK Country Manager at Capital Steel Ltd, said: “The KTP, the quality of our Associates and the immense support of our academic partners led to market acceptance and CE accreditation of our innovative approach to portal frame design.
The result has been a vital strategic advantage for our business, accelerated growth and increased profitability, and we are thrilled to be nominated for a `Best of the Best `award Dr Ruth McKernan, Chief Executive of Innovate UK, added: The drive, creativity and results that knowledge transfer partnerships achieve are incredible and it’s no wonder they have been going for more than 40 years.
“It never fails to impress me what people can achieve given the opportunity and encouragement. It’s those top calibre partnerships that get through the independent nomination process for our best of the best awards.
“Those nominated in 2015 are from every corner of the country and are a testament to the fantastic skills, talent and ingenuity that can be developed when our universities and businesses work together. Well done to them all.”

And so it was that Ash, Professor David Nash (Strathclyde University) and myself travelled down to London on Tuesday 10th November 2015 What a grand and auspicious affair it was with the UK`s leading companies and universities represented. It was humbling that the quality of Ash`s work and that of Andy (Andrej Wrzesien) who`s KTP was the foundation for Ash`s, was such that we were considered amongst the Best of the Best.

The event reminded me of the Oscars where the nominees wait with baited breath for the winners to be announced.

Sadly, it was not to be our day but we still take enormous pride in our nomination.

It says much for the integrity and expertise we have acquired over the past 10 years that has kept us in the front of cold formed portal frame design and the investment continues to this day. 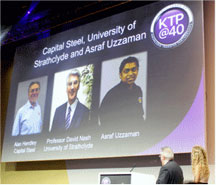 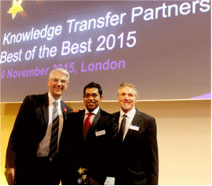 DO YOU WANT TO BECOME
A CSB DISTRIBUTOR?

GET A FREE
QUOTE NOW